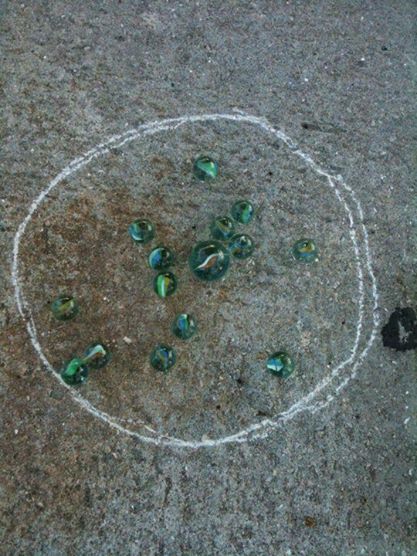 Here we were , three of use, Roach, Smakarootii and me, we were playing a hotly contested game of marbles. We were only eight years old, all of us small and skinny. I tell you what, I was beating the pants off them fellas, they did not stand a chance against a pro like me. I had a pile of marbles sitting on the ground, you see we were playing for keeps. Any marble you knock out of the circle, you get to keep. Roach was already vexed, I had won his favorite Iron marble, that boy would shine that marble like it was a gold chain or something. But now it was mine, it sat there sparkling in the afternoon sunshine. Roach was trying his best to win it back but I was in rare form today, hitting marbles out of the circle from impossible angles, smiling at the groans from my victims. I was just about to pitch my marble when I heard footsteps, they were coming fast. Then I heard someone shouted “Raaaafffff!” and four older boys rushed in, knocking Roach and Smakarooti over, grabbing all the marbles, it only took them a second to gather all the marbles, then they took off running, giggling like school girls. Roach went into a rage, that boy was cursing for so. Smakarooti started to cry, then took off running, his hands loosely swinging at his side, we heard him scream angrily as he disappeared into some bushes. Roach was still cursing, “Leh we go get we marbles!” He shouted, I looked at him, “Boy, yuh crazy or wah, is dem big bois dat tek de marbles you know,” I said then turned to walk away, “Ohhh I see how it is, you is a fraidy cat eh?” Roach said, I stopped, nobody challenges my manhood. I turned to Roach, “Leh we go den,” I said and walked in the direction the older boys ran, Roach hesitated, a little surprised I agreed. He followed me as we searched for the older boys. We were standing in front of a house when we heard laugher and an argument. We walked around the house and into the back yard. There were about seven older boys playing marbles. We stood there for a second not knowing what to do, one of the boys had Roach’s iron marble spit shining it. “Dat is me marble,” Roach said, his eyes red with anger, one of the boys looked over at him, I tell you what, he had the biggest nose I ever seen, he took a step over to us, “All yuh go come tek it from we?” He said, I did not pay attention to what he said, I was too busy afraid that I would get sucked into the two wormholes on his face. Roach immediately jumped behind me, as is that would do any good. “Well wah yuh waiting for eh? Come get yuh precious marble,” Mr. Big Nose said, and I swear his nose opened even more. It was then I realized that the heat from Roach’s body was no longer behind me, I turned around and saw the heel of his foot disappear around the house. Mr. Big Nose was still walking towards me. I turned and ran out of the yard so fast dust kicked up liken smoke behind me.

Me name is Anderson A Charles. I am a writer story teller and Podcaster, the original Steve urkel, yes I did that. Also played basketball in college ( that's because I am seven feet tall.