While walking through some bushes, I heard a rustle behind me. I pulled out the pistol tucked into my waistband and looked around. It was quiet except for the sporadic gunfire in the distance. I realized that the rustling came from some thick bushes ahead. I walked in that direction, my fingers tightly wrapped around the pistol. Before I got to the bushes, a deadly scent filled the air. I wanted to stop walking because I knew deep down what I would find. Still I continued, my heart pounding hard, causing my vision to be blurry. My mother always said I was too bloody inquisitive. I parted the bushes, my eyes closed at first. Even though I saw what I expected, I felt like someone had punched me in the gut. There was a body lying on the ground, its green uniform, brown with dried blood. I stared at it as an army of nature’s scavengers helped themselves to the rotting flesh that was left. I stood there horrified, my heart racing, my body tingling. It was as if I was waiting for something to happen. I closed my eyes, I guess I was trying to see myself in that man’s place.

Bob Marley lyrics exploded in my head, “Emancipate yourself from mental slavery none but ourselves can free our minds”. I swallowed hard, trying to stop myself from throwing up. Then another quote ran through my mind. It was the Karl Marx statement “Everyone is a victim of the system.” I wanted to be that body, feel free, no political system to tell me what to do, no religion to watch my every move. At that moment, feeling nothing would have been like paradise. Another Bob Marley lyric came to mind “If you know what life is worth then you will look for yours on earth”. I was not about to die to attain the freedom I seek. I had to stand up and fight for the life that I wanted. That moment was like becoming born again, a born again human being.

I was jolted back to reality when a helicopter swooped in and hovered over the bushes. I pointed the pistol at it, my hand shaking, beads of sweat rolling down my forehead, settling in my eyes. I wiped the salty liquid off and kept looking up. I was afraid they might have seen me; I was prepared to defend myself. The mosquito-like machine glided towards the hills on the other side and opened fire. Leaves and dust flew into the air, soldiers shouted, and birds flew from the chaos. I took the opportunity to run in the opposite direction. AK-47 rifles barked angrily as pockets of the local army fought back. I ran until I reached the dusty highway and I stopped to catch my breath, my chest burning. I realized I was still holding the pistol and tucked it into my waistband. The shooting stopped, and the helicopter whizzed by, its rotors creating a whirlwind of dust. I went home and sat in a chair on the verandah, my heart still racing. I got up, took out the pistol and looked at it. I placed it, along with an AK-47 and a couple of other guns, in a can that used to hold Lard, filled it with grease, dug a hole, and buried it next to a Paw Paw tree. That was the last time I held a gun, forever elevating the false sense of safety I once felt.

Walk in the rain down a path, feel the mud hug you toes, hear the suction of the mud against your feet. Feel the rain hit the top of your head sending a waterfall of coolness down your shoulder. Walk until the path becomes rocky, and you can see your footprints on the rock’s surface, and the darkness of the forest turns to the gray light of a cloudy morning. Here you stand, looking past the village, the beaches, the ships in the harbor, you look out to see. Here is where you will stand waiting for the next storm to form over the ocean.

Now that the night is upon us, it is time to go to my spot. Where the bushes are think and a short distance away the ocean meets the land. Find a rock in the middle of the bushes, sit, fell the breeze tickle my face, wait until the fireflies light up the night. 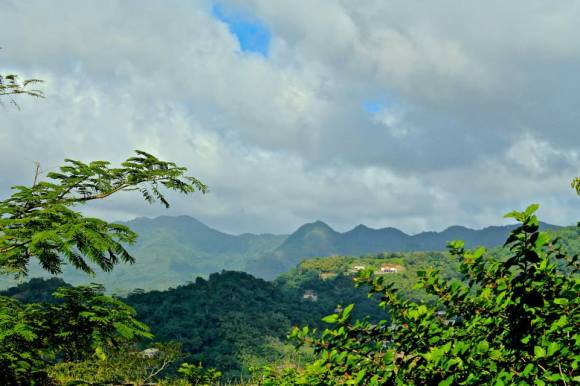 One of my favorite things to do was going to walk through the forest after a rainstorm. Ahhh the scent of the mud as my bare feet sink into its soft surface. The cold droplets of rain dripping off the leaves of the trees. The smell of mangos ripening somewhere in the bushes, The wings of birds flapping as they soar from tree to tree. The butterflies that float away when you shake the bushes. Then on the day when rain persisted, taking shelter under a large banana leaf while eating the yellow spotted fruit. Yes, boyhood days, full of adventure on that little island called the Isle of Spice

“What is this?” Henry asked as he looked up at the rose bushes. They stood about seven feet tall and their stems were about five feet in diameter. The scent of the rose blossoms permeated the air choking them a little. They were not the only flower that bloomed in the giant flower garden. Hibiscus bushes as tall as the roses stood up, their orange and red blossoms shimmered in the limited sunlight. All kinds of animals mulled around as if hypnotized by the beauty and aroma. Henry reached up and touched one of the rose petals. Drips of water rolled of the pink petal and onto the palm of his hand. He turned to Adofo,

“This is crazy, maybe the evil spirits are playing tricks on us,” he said and looked around confused. Henry left the rose bush and walked ahead turning around as he did,

“Still this is beautiful,” he said, as he closed his eyes and sniffed.

“This seems peaceful let us relax a minute and have lunch,” Adofo said as he looked around cautiously.  Cougars, mongooses, predator and prey moved around aimlessly. Henry heard a rustle next to him and he opened his eyes. The cougar he saw earlier stood looking at him.

They got to an area where the giant flowers changed species. One had bright red petals that glistened as if it had just rained. It was not tall, but its leaves and its core spread out on the ground in a circle about five feet in diameter. The cougar had followed them and had stepped on the plant. Suddenly the granular hairs on the petals wrapped around the animal. It growled and struggled, but the hairs tightened even more. Its head disappeared into the plant’s leaves then reappeared; its eyes were bulging as the killer plant squeezed its torso. The other animals began to stampede as the cougar roared and fought. Henry stood frozen with fear as the animals began to bump into him.

“Come on run!” Adofo shouted and moved towards Henry. A herd of wild hogs ran by ramming into Adofo. He stumbled backwards and yelled. Henry turned towards where Adofo had fallen. The stampede of animals ran into the jungle, and after the rush, Henry saw that Adofo had gotten to his feet but was leaned up against a tree struggling

“Let go, Adofo screamed. He was entrapped in a plant, his eyes bulging as he struggled. It was bright red and sparkled a little in the light. A small hood like spoon dangled at the tip of its leaves. Adofo was stuck in a funnel like zone of the gigantic leaf.

“Damn possessed bush!” Adofo screamed. The hairs on the leaf were pointed downwards making it hard for him to get his footing. The lower half of the funnel was large enough to swallow Adofo into the plant.  Henry leaped into action and used his machete to cut at the plant’s roots.

“Hang On!” Henry shouted. Adofo gasped for breath as he slipped further down into the funnel. Henry swung the machete the

“For Christ sake, cut, cut, cut!” Henry screamed. Finally, the plant went limp, and the funnel flopped to the ground, and the hairs wilted immediately. Henry cut Adofo out of the thick leaf. Adofo exhaled as he struggled to get air to his lungs. Henry tried to pull him up, but his arms were covered with slim. He stopped trying and stood over Adofo as he composed himself. Adofo was finally able to stand up and wiped his eyes, and blew slime from his nose