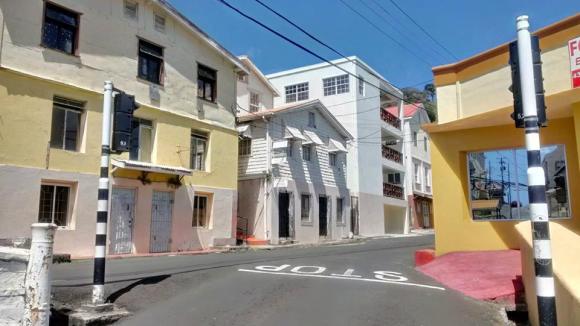 Ahhhh my old stomping ground, you see where the pink is painted on that building to the left, yeah, right there, the one with the yellow above the pink and the cream above the yellow, yes, that’s it, well that is where I used to live. It was from that window I sat and watch the riots in the 1970s, the tear gas, the secret police rushing the crowds with their cutlasses. It is from that window I would look out at 4 pm everyday to see Mommy Charles coming home from a hard days work in the Ministry of Finance., yep Mommy Charles worked for the Government, Look, I see they have street lights now, I guess they don’t need the policeman signaling traffic. Ohhh yes, the old stomping grounds, good old Lucas Street.

Jab Jabs!” she shouted, as she moved out of the way of one of the devils. The Jab Jabs all had clubs that they swung as they charged. Henry swung his machete at one of the Jab Jabs; the demon looked at him in disbelief, and then looked at his own body. There was a long cut that went from his chest to his waist. Ashes spilled out of him cascading down his legs and onto the ground creating a small mound of ashes at his feet. He looked back up at Henry, then vanished leaving a cloud of ash floating in the air. Out of the corner of her eyes, Akosua saw a Jab Jab coming towards her, his club held over his head. She waited until he was close, sidestepped, and pushed him into a tree. The Jab Jab melted into the tree trunk and an ear splitting crack filled the rock valley as the tree exploded. It hit the ground and the valley shook. The Jab Jabs came in waves, their voices suddenly echoing through the valley, trees shook and swayed, leaves curled as if hiding with fear. “This way!” Donkor shouted as he pushed around Akosua. Akosua and the others followed fighting off Jab Jabs as they went. The jab Jabs disappeared every time they were struck, but more of them appeared out of thin air. They ran until they were at the edge of the jungle looking down to the middle of the mountain top. It was like looking down on a snow covered field. The Jab Jabs were fast approaching and they turned around to confront the wave of demons. Akosua swung her Machete and two Jab Jabs disappeared, she coughed as the air around her became a mist of ashes. Their red tongues stretched out, their red eyes blazing but somehow seemed lifeless. Akosua jumped down onto the white ground and Henry and the warriors followed her.   The mountaintop echoed with crunches as they landed on the white earth. Kwao hesitated, his back to the Jab Jabs. One of them hurled his body at Kwao and disappeared into him. The boy stumbled forward onto the white ground. He turned and looked at Akosua and stretched his arm out. At first he looked like he was pleading for help, but instead, his expression changed into a menacing stare. Without saying a word he raised his machete and charged at her. Donkor raised his machete just as Kwao brought his down. The sound of metal against metal echoed loudly. Kwao raised his machete again and Donkor stepped back and blocked Kwao’s swing with his machete. Donkor stumbled back leaving Akosua exposed to Kwao’s attack. The boy lunged at Akosua, ash exploded from his mouth. Akosua looked into his eyes it was turning red. His tongue was stretched out; it was slowly changing from pink to red. The change started from the tip of his tongue, and soon his whole mouth was red. Slowly, he began to turn an ashy colour, the change going up his arm to his body. Akosua prepared herself for his charge, but before he got to her Adofo had wrapped his arm around Kwao from behind. Kwao struggled, his eyes completely red, his tongue had turned into blood red and the upper half of his body was ash coloured. He continued to struggled and almost escaped Adofo’s hold, but Donkor had rushed over and grabbed him. Suddenly his whole body jerked and he leaned forward and threw up violently. Grey bile spilled out of his mouth, and the white ground melted as the grey liquid landed on it. Kwao staggered and stumbled backwards as Adofo and Donkor struggled to hold him up. Akosua walked up to him, the bile bubbled on the white ground fizzed, then disappeared. Akosua touched his face and he opened his eyes. She reached into her sack and pulled her Aron. She shook it over Kwao’s head, its sound echoed with the sound of the wind in the trees. Slowly, Kwao began to look like himself again. The red in his eyes dissolved, as puffs of ash floated out of them. His tongue returned to a healthy pink hue as he coughed out ash. The skin on his arm moved as if the ash was rolling around right under it. It trailed down his arm then escaped through the tips of his fingers in small puffs of ash.. He straightened up and looked around. “What happened?” he asked, Akosua put her Aron back in the sack. “You were possessed by the Jab Jab,” she said. She turned and looked at the others; they were all facing the Jab Jabs anticipating an attack. The demons stood, as if stopped by an invincible wall, their red eyes wild, and their tongues hanging out of their mouths.